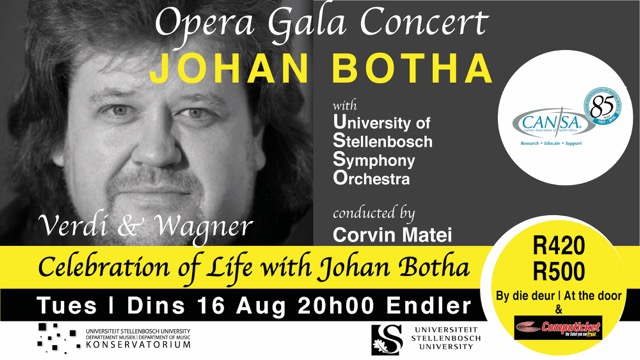 In a celebration of life, cancer survivor Johan Botha, acclaimed as one of the world’s greatest tenors, will perform a Gala Concert backed by the University of Stellenbosch Symphony Orchestra as part of the Endler Concert Series. The concert will take place at 20h00 on Tuesday 16 August at the Endler Hall, Stellenbosch.

Botha will sing a number of solo opera excerpts as well as a selection of duets with Lauren Dasappa (soprano) and Jolene McCleland (mezzo soprano), both of whom have distinguished South African careers and lecture at Stellenbosch University’s Department of Music. The University of Stellenbosch Symphony Orchestra will be conducted by Corvin Matei. Part of the proceeds of the concert will go to CANSA to promote awareness.

The first half of the concert will open with Verdi’s  Triumphant March from Aida followed by the aria Celeste (Botha) and the duet by Amneris-Radames (McCleland & Botha) from the same opera. The student’s of the orchestra get their chance to shine in the Intermezzo from Cavalleria rusticana by Mascagni before Botha closes the first half with an aria from Otello and the great Love duet, Già nella notte densa, sung with Lauren Dasappa.

The second half will be comprised of music from Wagner’s operas: Die Meistersinger von Nürnberg, Rienzi and Lohengrin. Beginning with the overture to the Meistersinger and the excerpt Preislied (Botha), followed by Allmächt’ger Vater from the opera Rienzi. The concert closes with the orchestral prelude to Lohengrin and In fernen Land from the same opera.

Botha has been a Kammersänger in Vienna since 2004, holding one of the most coveted positions in the opera world. The South African tenor studied in his native country and made his debut in Roodeport, before moving to Europe in 1990, where his international career was rapidly established following engagements in Germany. He sings in all the major opera houses from Berlin to the Metropolitan Opera, and his recordings include CDs of Aida, Elektra, the Verdi Requiem, Die Meistersinger, Lohengrin and Die Walküre.

Tickets for R500 (regular) and R420 (students and pensioners) are available now through Computicket and at the door.