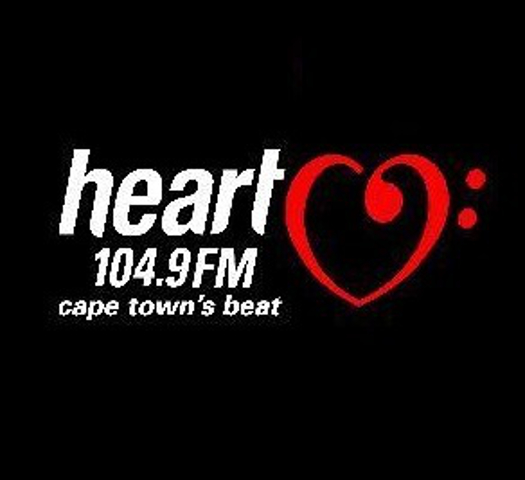 Although it is considered a jazz radio station it encompasses many different genres of music, ranging from jazz to funk and pop.

Heart 104.9 FM broadcasts in English. Regular updates regarding news, sports, traffic, weather and financial matters are constantly available to their listeners. The radio station attracts about 527000 listeners weekly, who are provided with a combination of music, chat, special features and guests as well as various on air promotions. Heart 104.9 FM aims to keep a good and active relationship with their listeners within the communities they serve by engaging in regular live outside broadcasts, club and venue promotions as well as charity fundraisers. The radio stations line up includes some of the Djs who have been in business the longest but they also embrace new talent.

Heart 104.9 FM was originally launched as P4 radio in July 1997. Then P4 radion was considered one of the fastest growing radio stations in South Africa at the time. P4 Radio was the first radio station is South Africa to target and attract high income earners from the black and coloured communities of South Africa and see positive growth in both revenue and audience. 8 years after inception P4 radio was relaunched as Heart 104.9 FM with the tag line ‘Cape Town Soul’. Even though the name changed, the CEO, at the time, Gavin Meiring ensured the listeners that the sound of the radio station would remain the same. Prior to the name change research was done among the listeners and it was found that they had no strong attachment to the name and didn’t mind it changing.

Heart 104.9 FM hosted the first gay reality wedding in SouthAfrica. The live show was presented on air during ex-breakfast presenter, Phat Joe’s, show. As part of the show the men were only allowed to talk to each other on radio and of 5 bachelors the groom, Lloyd Kandin known on the show as ‘Lekker Larry’ picked only one,Shane Everts known on the show as ‘Hastige Hendrick’ and proposed to him at the Grand Daddy Hotel, Cape Town. They were wearing masks as not to reveal their identities. The couple only met on the day of their wedding but had engaged in numerous chats on air. As a reward they were given a lavish wedding to the value of 1.4 million rand. The listeners were able to follow the action and excitement and the build up to the wedding.

For more information, click on the link below:
Heart 104.9 FM

WWE will no longer be airing on the e.tv