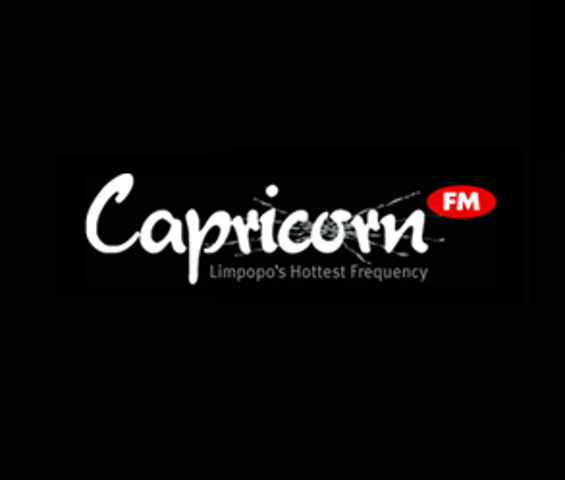 Capricorn FM is the first commercial radio station in northern province of Limpopo in South Africa.

Overview:
Capricorn FM broadcasts on 96.0 FM in Mokopane/Polokwane; 98.0 FM in Hoedspruit; 105.4 FM in Louis Trichardt; 89.9 FM in Sibasa and 97.6 FM in Tzaneen and is available internationally by streaming audio over the Internet. As a commercial radio station, the broadcasting format carries 70% music and 30% talk shows, in an attempt to feature a variety of urban genres in R&B, soul, afro-pop, afro-soul, hip-hop, kwaito, house and also cater for jazz and gospel lovers.

Taking its name from the latitudinal line that cuts across Limpopo (Tropic of Capricorn), the only province in the country with one of the five major circles of latitude that mark maps of the earth; began broadcasting from its state-of-the-art studios in Bendor, Polokwane six months after receiving its commercial broadcast license. It was established on the 26th of November 2007 and has been led by the CEO Simphiwe Mdlalose who represents MSG Afrika Media, who together with his partner and former talk show host Given Mkhari were part of consortium that successfully competed against a number of contenders for the license to broadcast in Limpopo. Notable presenters have included Shandu Madima, Karabo Maila,Prudence Mabasa Thabiso Kotane and the Capricorn fm Breakfast Ashifa Shabba, BK.

As a commercial radio station, the broadcasting format carries 70% music and 30% talk shows. The music will feature a variety of urban genres in R&B, soul, afro-pop, Afro-Soul, hip-hop, kwaito, and house, and also cater for jazz and gospel lovers and what Capricorn FM describes as urban jazz and urban gospel. Peoples of all ages will each find that they have been included in the station’s broadcasts. The idea to cater for an ever diversifying audience was paramount to the decision to broadcast 70% in English and 30% vernacular, incorporating the three dominant ethnic groups in the province (tshiVenda, sePedi, xiTsonga). Capricorn FM broadcasts 24 hours throughout Limpopo with five transmitters covering the main towns and areas surrounding them.

The station offers adult contemporary, interspersed with news and views from the station’s team of on-air personalities. The community is strongly reflected. Exciting competitions form part of the station’s day to day activities and at the time of going to press, there are competitions sponsored by Tastic Rice and Samsung Mobile. The weather and sports news also fill in a substantial percentage of the content.

For more information, click on the link below:
Capricorn FM