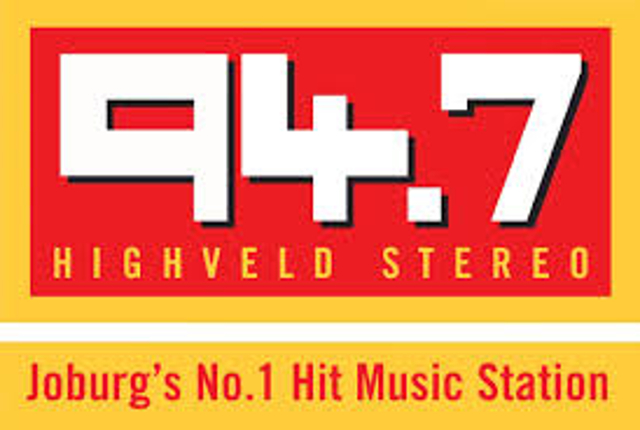 The station first went on the air on September 1, 1964, as the first SABC regional FM service, Radio Highveld. At that time the station broadcast hourly news bulletins and easy listening music. In September 1996 the SABC sold Radio Highveld to private enterprise.

Today this station, along with a number of other radio stations in South Africa, is owned by Primedia.

Format and Programming:
94.7 Highveld Stereo is arguably the Gauteng province’s most popular radio station, broadcasting the often controversial Rude Awakening breakfast show, which was hosted by Jeremy Mansfield. The target listener demographic is aimed at 25– 40 year-olds, and as such the station tends to play contemporary “soft” rock, current pop hits as well as a few classics. Highveld also makes a point of giving airtime to local South African musical talent. Other useful services to listeners include news bulletins and traffic reports for Johannesburg and Pretoria.

On 2 August 2010 the station revamped the morning show by renaming it Breakfast Xpress and appointing Darren Simpson (also known as “Whackhead”) as the new front-man in place of Jeremy Mansfield. Mansfield left the morning show (better known as “The Rude Awakening” or “RAW“) in July 2010 stating “The show needs to move forward and I don’t see a role for myself in the new product offering. Management and the board have asked if I would assist with off air initiatives, which I am happy to do for the foreseeable future.“ The format of the new breakfast show remains largely unchanged with the rest of the original team remaining as is.

Highveld Stereo is well known for sponsoring and promoting many charity and social events in Gauteng, including the Momentum 94.7 Cycle Challenge and the Rude Awakening Christmas Wish.

In response to Darren Simpson’s parody of South African Deputy President Jacob Zuma’s ongoing rape trial of 2006 –for which Zuma was acquitted– Zuma filed a defamation lawsuit on 30 June 2006, for the sum of R 5 million. Zuma originally filed for R 2 million, but this was upped when Highveld Stereo re-broadcast the allegedly offensive skit.

For more information, click on the link below:
94.7 Highveld Stereo