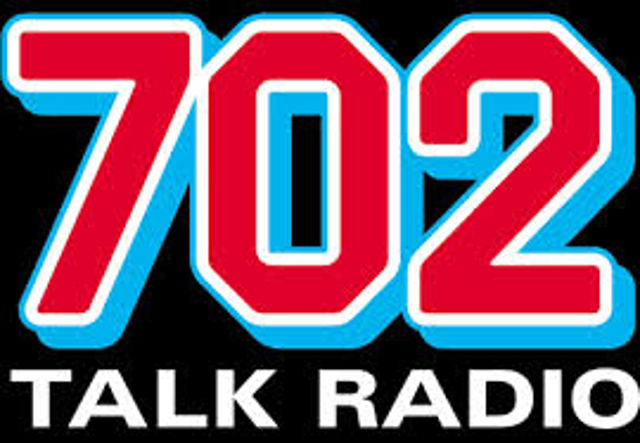 Radio 702, currently known as Talk Radio 702, is a commercial FM radio station based in Johannesburg, South Africa, broadcasting on FM 92.7 and FM 106 to the greater Gauteng province. The station is also webcast via its website. It claims to be Johannesburg’s number one news and talk station, offering news, sport, business and actuality programming and plenty of phone-in debates. 702 also features the Naked Scientist, Dr Chris Smith who takes part in a half hour science phone-in every Friday morning.

The station itself was established in 1980 and was initially a young adult music station, moving to a talk format in 1988. During South Africa’s apartheid era it, and Capital Radio 604, were the only independent sources of broadcast news. The station is owned by Primedia

Hot on the heels of the independent radio station Capital Radio 604 broadcasting from the Transkei, which due to technical problems had failed in its bid to serve the lucrative multi-racial audience in the urban areas of South Africa’s old southern Transvaal province, Channel 702 was started in 1980 by entrepreneurs Natie and Issie Kirsh in the country’s homeland of Bophuthatswana, which like the Transkei was at the time independent of South African rules and regulations. The station’s signature line was “In touch, in tune and independent.”

Radio 702 (first called Channel 702 ) was originally based on the US inspired top 40 music format pioneered by LM Radio broadcasting to South Africa from Mozambique, and Swazi Music Radio (SMR) which broadcast from Sandlane in Swaziland with studios in Johannesburg. SMR was established and operated by the brothers Isaac (Issie) and Nathaniel (Natie) Kirsh, the founders of Primedia which owns Radio 702. Many of the early presenters on SMR cut their teeth in broadcasting at LM Radio or worked there, like Gary Edwards, John Berks and Frank Sanders. LM Radio became Radio 5 (now 5FM) in 1975 when Mozambique gained independence.[1] SMR was not very successful and was replaced by Radio SR which was the first South African radio station playing entirely music by black South African and American artists. Radio SR was an instant success and broadcast from the SMR studios and transmitters. Rob Vickers of LM Radio fame was the programme manager at Radio SR. When Issie Kirsh set up 702, he appointed Rob Vickers, Gary Edwards, Frank Sanders and Stan Katz, all of whom had worked on SMR / Radio SR as well as Clark McKay who had previously worked at LM Radio and Springbok Radio. John Berks who had spent time on Radio 5 and later Capital Radio 604 joined shortly thereafter. Cocky Two-Bull Tlhotlhalemaje, a jazz musician and broadcaster was the first black African to work on Radio 702. He helped to break down the barriers between the youth of all ethnic groups. The station’s original weekday line-up was: Clark McKay (Breakfast), Frank Sanders, Jerry Cohen, Paul Stephens (Afternoon drive), Cocky “Two Bull” Tlhotlhalemaje, Zuby, & Jim Hicks. Traffic reporter Paul Beresford was included as a question in the South African version of Trivial Pursuit. Initially, news was only included to meet the station’s licence requirements, but as interest in “independent” news grew, so did the station’s news resources. The station’s first news editor was former television journalist Pat Rogers, followed shortly afterwards by another former TV journalist Chris Gibbons, the latter being one of the station’s current anchors. The first full-time reporter, Allan Leibowitz, was employed in 1984. Over the years as the station evolved into a 24 hour news channel, it pioneered “702 eye-witness news”, broadcasting full news bulletins every hour and headlines on the half-hour. Some of the other popular presenters were Mike Mills on the afternoon show; former Ireland, Lions and Transvaal rugby player, John Robbie, who began as a late night talk show host, with Talk at Ten, then Talk at Nine (currently hosted by John Webb), eventually moving to the main morning talk show; former Manchester United goalkeeper, Gary Bailey, and many others who popularised the station. Also heard on Radio 702 in the early 1980s was American Top 40 with Casey Kasem.

Up until the late 1980s, 702 was a popular music station. The government run Radio 5 (today known as 5FM) moved from medium wave to FM Stereo in the major centres, and 702 found it could not compete technically. The station dabbled with a half-talk/half adult contemporary music format from 1989, and on 11 February 1991 the station adopted an all talk and news format, however the station has Solid Gold and Big Band shows on the weekend.

In the first 12 years of operation, 702 played a very important role in bringing news and information to the people of the provinces of the Transvaal and the Free State. Because the transmitters were located in the nominally Independent homeland of Bophuthatswana, the South African government could not gag or influence the editorial and news content. To have done so, would have made a mockery of the “independence” of the homeland. This freedom of information and speech provided a platform for opponents of the apartheid administration and the station is recognised as having contributed to the peaceful transition of South Africa to the democratic society which now exists.

Members of ‘banned’ organisations, including the ANC itself, made use of the opportunity to use the medium to keep itself abreast of national political developments and put across its own views and stories.

The station kept pace with the changing political landscape, covering the major changes throughout the years with a professionalism and zeal that impressed even experienced international newspeople.

In 2011 the station sacked one of its newsreaders, Mark Esterhuysen, after he swore 13 times live on air.

For more information, click on the link below:
Talk Radio 702

Upcoming events at the Endler Concert Series, University of Stellenbosch