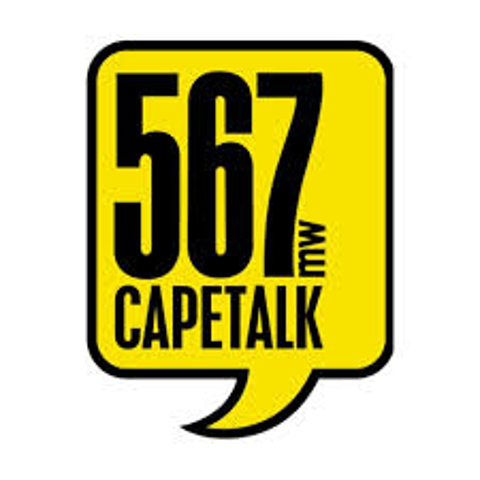 567 CapeTalk is a commercial AM radio station based in Cape Town, South Africa, broadcasting on AM/MW 567 to Cape Town. The station is also webcast via its website. It claims to be Cape Town’s number one news and talk station, offering news, sport, business and actuality programming, with plenty of phone-in debates. It was established in 1997. The station is owned by Primedia.

567 CapeTalk celebrated a decade of independent broadcasting in 2007. The station hit the airwaves at 06h00 on Tuesday, 14 October 1997. From the start it was positioned to provide an independent forum for the citizens of the Mother City, allowing them to swap ideas and voice opinions. The first home of 567 CapeTalk was in Bree Street and it was here that presenter John Maytham welcomed Cape Town to the station’s first broadcast. Former presenters include the former Sunday Times columnist Jani Allan between 1997-2000.

567 Cape Talk is well known for hosting, sponsoring and promoting many charity and social events in Cape Town. Examples of these include: The 567 CapeTalk Fire Relief Fund Radiothon raised over R1, 25 million for the city’s fire services when fires on Table Mountain threatened homes and lives in the city.

About 3000 Capetonians participated in the 567 CapeTalk Silence the Violence Walk for Peace march to protest against crime and violence in the city.

The 567 CapeTalk Birthday Build generated about R1, 12 million in aid of Habitat for Humanity, resulting in the building of 28 homes in poor communities.

Thanks to the 567 CapeTalk Blanket Drive more than 19 000 blankets were collected and about R250 000 was raised after rains and floods left thousands of people homeless.

The annual 567 CapeTalk Wiggle Waggle Walkathon, held to raise money for the animals at the Cape of Good Hope SPCA, is a fun walk for dogs and owners that has become a tradition among thousands of two and four-legged entrants.

Every year Capetonians flock to 567 CapeTalk’s flagship event Moonstruck on Cape Town’s Clifton 4th Beach. It’s a fun family picnic evening of music and dancing on the beach under the stars and a way of raising funds for the National Sea Rescue Institute.

For more information, click on the link below:
567 Cape Talk